After two long years, OzBosco was able to return to an in-person event, to the great joy of all that gathered! Around 60 young people and teachers joined 2 SDBs and 2 FMAs for a weekend gathering, sharing in each other’s presence, joy and exuberance!

Beginning on the 26th of August, this fourteenth edition of OzBosco explored the theme of the Strenna, All Through Love, Nothing by Constraint. Gathering at the Don Bosco Camp in Safety Beach, the program begun on the Friday night in the way Don Bosco himself taught us – fun and games!

The campsite is located on the ancient lands that the Boon Wurrung Indigenous peoples have cared for over 50,000 years. We were lucky enough to have two of their number join us for a Welcome to Country ceremony, which included an astounding performance of the Yidaki; the instrument commonly erroneously referred to as a Didgeridoo – just one of the many fascinating aspects of Indigenous culture that was shared with us! 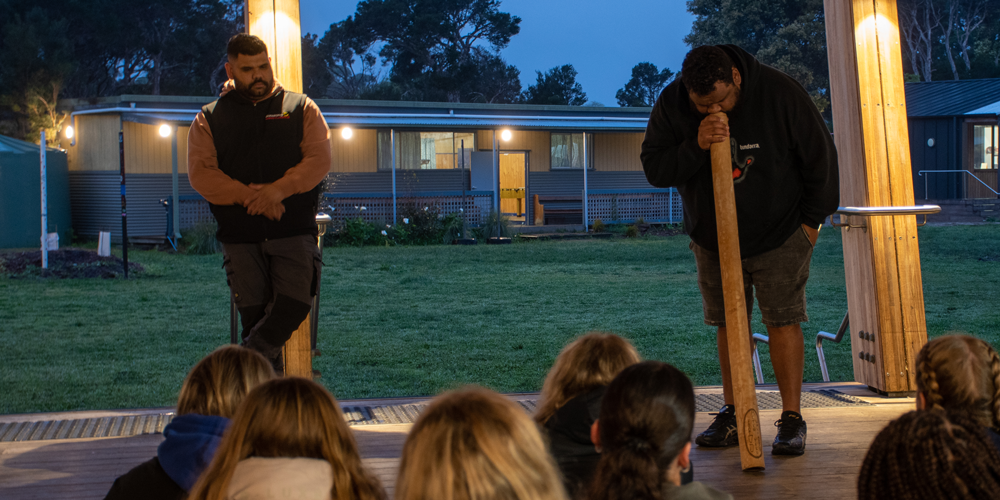 It was explained that the word "didgeridoo" actually refers to the sound the Yidaki makes.

We were then welcomed by our hosts for the weekend, the students from St Joseph’s college in Ferntree Gully. The made it their mission to be as welcoming, supportive, and friendly to all that had gathered from around Australia, and the excelled at from the moment OzBosco begun, to the moment everyone got in the busses to go home! 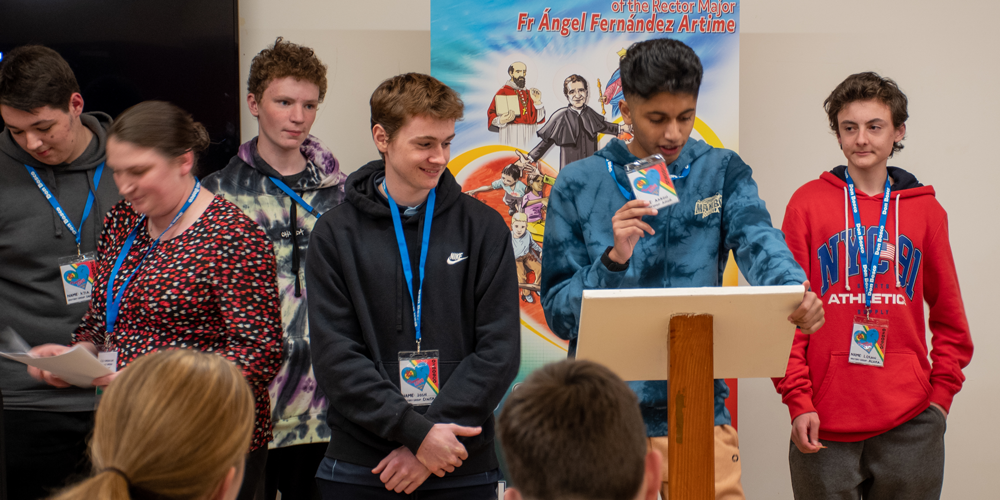 A selection of the amazing hosts from St Joseph's, with the incredible teacher Bronwyn who's guidance and passion encourages the students to excel!

For our first major activity for the weekend, we were split into our Oratory groups (groups of about 10 people) and begun to explore the central theme of the weekend. Everyone was asked to draw or describe some of the things they love on bits of paper, which once all the groups were complete, came together to form a giant jigsaw heart, a touching, personalized centerpiece for the rest of our time together. 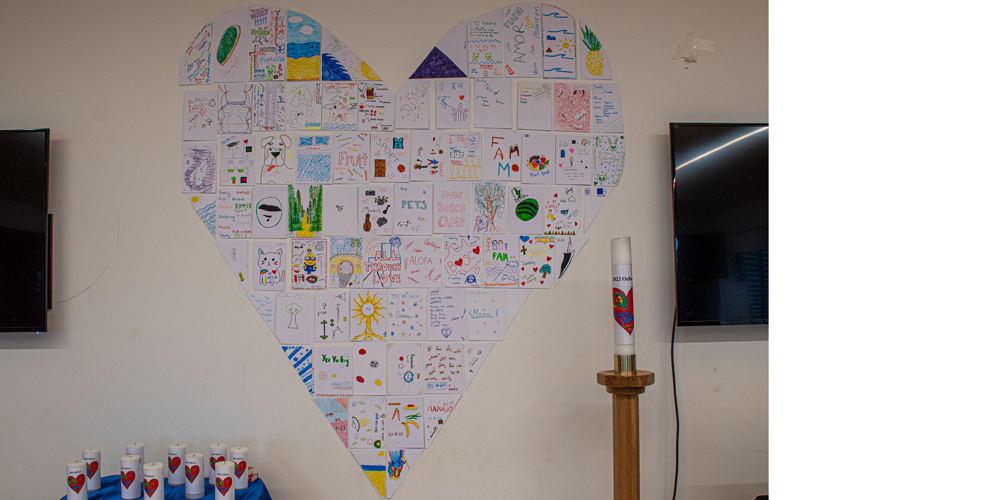 For some it was their pets, others food, plenty said sports, a few said the beach and some said Jesus all these things we love!

The following morning (after an energizing round of warm-up dance and aerobics) we were joined by Adrian Eagle, an awesome musician who has been making waves in the Australian music scene. His talk was a genuine reflection of the person he was, speaking to us openly and vulnerably about the lowest of lows in his life and the highest of highs. A large cross-section of the audience are young aspiring musicians, so exploring his musical career got everyone hooked. Particularly poignant for the group was when he spoke about his close relationship with God and how it informs everything he does. 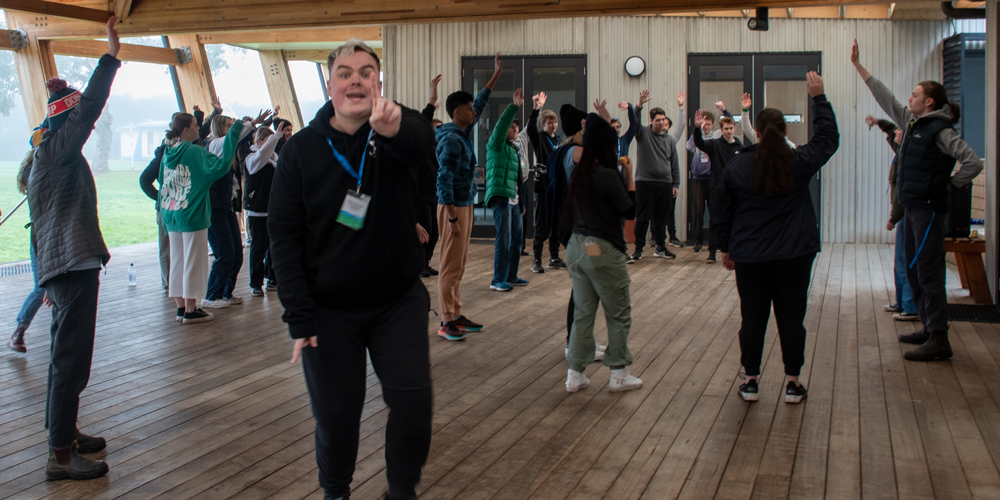 The workshop sessions, an OzBosco favorite saw the young people given the choice to participate in whatever sounded the most interesting to them. They could choose from Music Ministry, a 150th Birthday party for the FMA’s, a conversation about how and why running games is so important in Salesian settings and a crafts session that encouraged relationship building and conversation amongst friends.

Exploring one of Francis de Sales’ key teachings, we spent some time discovering the idea of vocation. Everyone was asked to think about what they wanted to do as they progressed in life and more importantly, the types of people they wanted to be. These were collated on the backs of cardboard cutouts of the Minion characters from the popular film series, becoming our mascots. As our values and dreams filled their backs, they became like all of us – easy to judge and familiar from first glance, but with a lot more depth and true meaning a bit deeper in!

Disastrously our mascots went missing that night! All seemed lost, and darkness spread! Luckily, we were able to remember the teachings of Francis de Sales, and with the help from a cross-section of other significant Salesian figures, we were able to rescue them in the big night game!

Groups were tasked with searching the campgrounds for aid from these figures, which allowed them to enter the challenge area, where they learned a little bit more of Francis’ life and teachings and completed a challenge to cement what they had learnt. After the groups had all successfully completed the challenges our mascots were rescued, and we celebrated with a disco!

On Sunday, we were joined by some great friends throughout the day. First to join us was Sr Sia who alongside Br Jeff led a panel discussion where they spoke about how they came to know their respective vocations, and the way their lives as “Salesians in training” plays out on a day to day basis. After a weekend of exploring these themes, the real-world example provided for us was a great insight into what vocation is and how someone can figure out how to live the life they are called to! 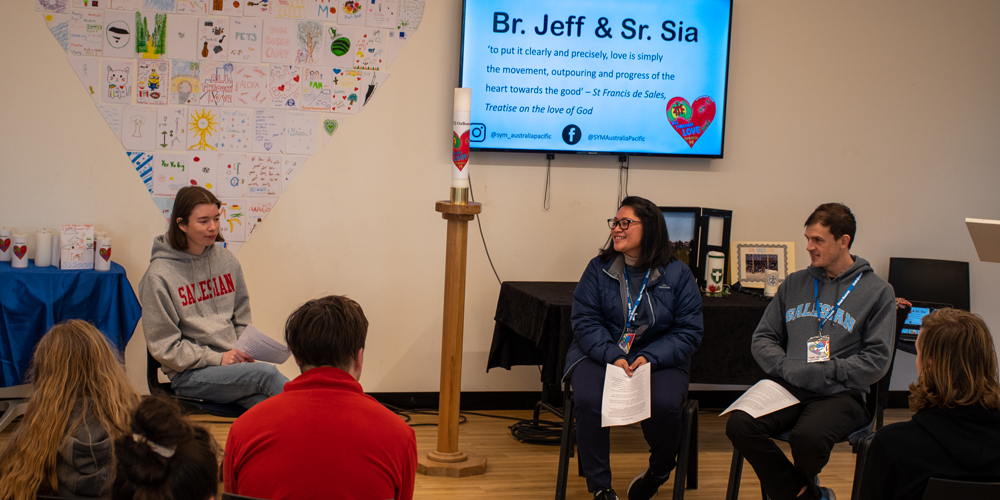 Teaghan leads the discussion with Br Jeff and Sr Sia

Our next friends that joined us were Fr Will (Provincial) Fr Peter (Provincial economer) and as an extra special surprise, Fr Joseph (East Asia-Oceania Regional Councilor)! They joined Fr Brian (Youth Ministry Delegate) and concelebrated mass for the entire group, a special culmination of the weekend. Sr Louise (FMA provincial) had also joined us for this celebration, forming a great moment of Salesian family! 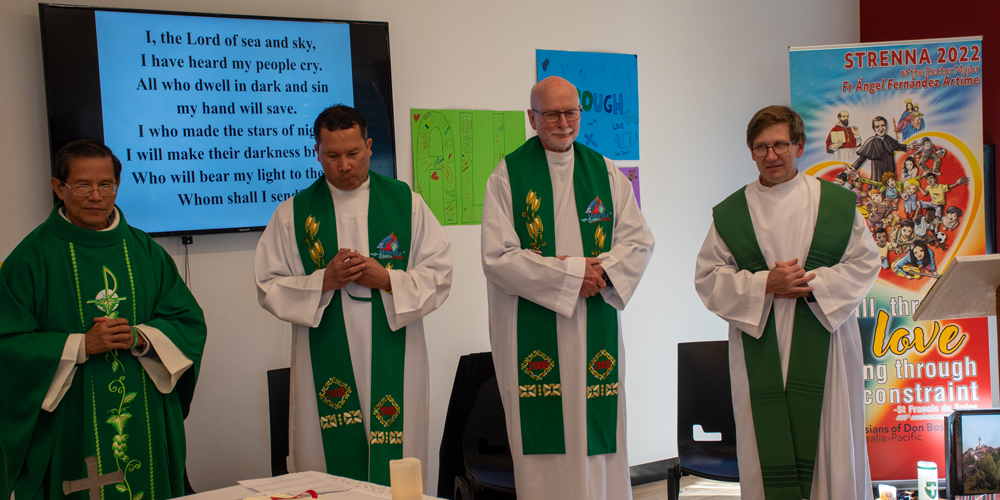 As is the case with wonderful events such as these, the farewells came way too soon! Teaghan (Youth Ministry Coordinator) gave a series of thank-yous – to those who had gathered to be present for the weekend, to the host students and to the small planning team, each who received great applause. However, the most resounding applause was for Teaghan herself; the group recognizing that the special weekend they had just been apart of was off the back of her hard work and her incredible composure whilst navigating the many hurdles and roadblocks that had come her way throughout the entire planning and running processes of OzBosco!

As new friends swapped contact details, packed their bags, and loaded the busses, a special atmosphere filled the air. A pinch of bittersweet as we said farewell and returned to distant parts of Australia, two parts hope as we looked forward to seeing each other again in the future, a dash of gratitude as we reflected on the special weekend we had been privileged enough to be on, and a large portion of love that we had shared with one another, ready to take back home to our various communities!

To see more photos from OzBosco14, visit us on Flickr!

We have 66 guests and no members online