Strenna 2023: Other images and suggestions worth sharing

In the long months of work leading up to the official release of the Strenna message for the New Year, the Sector for Social Communication, at the request of the Rector Major, Fr. Ángel Fernández Artime, contacted various social communication centers and graphic designers from various parts of the world to come up with their proposals for the poster that accompanies the message.

Although, as is well known, the official posters have already been identified in the two options elaborated by the Office of Social Communication of the Province of Portugal and by the Spanish graphic designer Agustín de la Torre, the Rector Major himself has pronounced himself to allow the digital dissemination of the other proposals received, all of which are capable of conveying, in different forms and styles, the motto chosen for 2023: "AS THE YEAST IN TODAY'S HUMAN FAMILY. The lay dimension in the Family of Don Bosco."

The other proposals screened by the Rector Major came from India, by Salesian Fr. Paul Sathish, of the India-Chennai Province (INM); by Italian graphic designer Fabrizio Emigli, already the designer of Strenna posters in past years; and by the Chilean Salesian Family's multimedia center "Caetera Tolle." 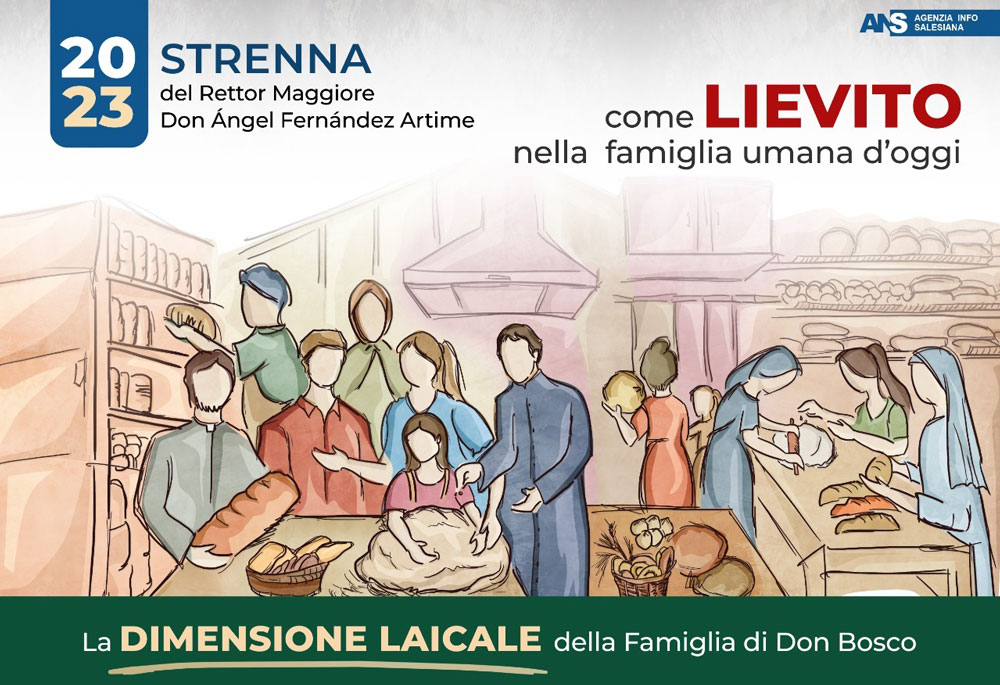 The design by Fr Paul Sathish

Regarding the first proposal, that of Fr. Sathish, the context depicted illustrates a team effort, in which everyone contributes to producing the bread of life for humanity. Everyone is involved and busy in his or her own capacity to produce the bread. Don Bosco and his mother are also present in the background with the intent to guide and inspire people by encouraging them to get involved. "Everyone has a role and contributes to the final product. The leaven in the painting is barely perceptible and almost hidden, but its fruits appear visibly in the final products and especially in the attitudes and gestures of the characters depicted," explained the Salesian. 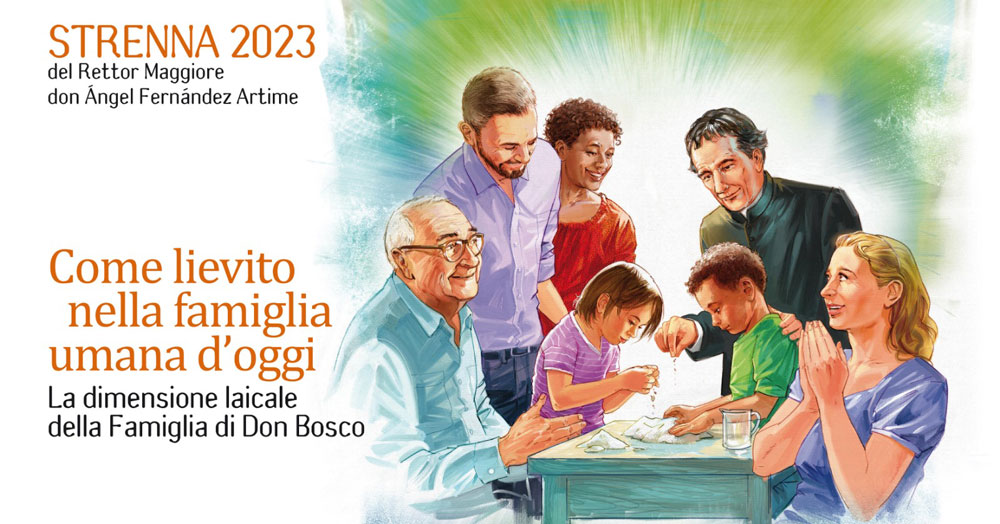 The design by Fabrizio Emigli

For his part, graphic designer Emigli explained his proposal as follows, "I have always felt part of the Salesian 'Lay Family.' That of the Strenna 2023, therefore, is a theme particularly dear to me. In the drawing, it is Don Bosco himself who helps the two children prepare the base for the dough and participates in the ritual of preparing the bread (I liked that it was a playful preparation; the children often enjoy kneading with water, flour and yeast, with adults beside them complicit and involved in an educational game). I deliberately included Don Bosco among the family members, without detachment; an unobtrusive but fundamental presence in the scene. He participates in the gesture of sprinkling yeast on the dough, he controls, teaches, educates, watches the scene (and is 'IN THE SCENE') as a friend, a diner to add the very ingredient that influences, conditions and transforms the whole dough. The style chosen is somewhere between portraiture and comic strip. The white base on which the drawing rests and stands out has a slight rough texture, barely perceptible, that adds warmth and a sense of family and home to the whole scene." 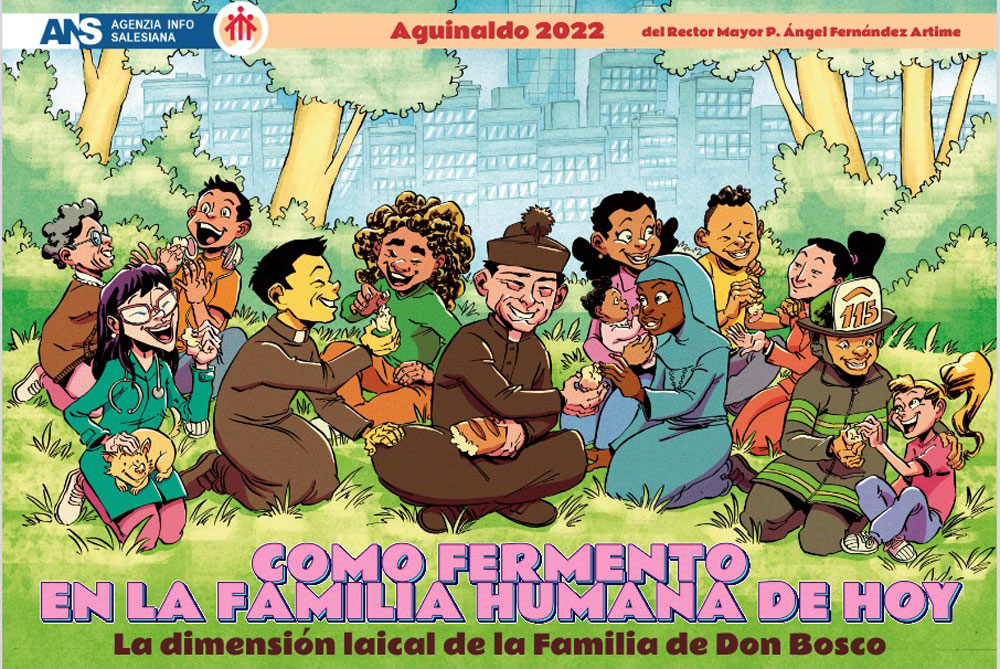 The design by Caetera Tolle

Finally, from Chile, those in charge of the "Caetera Tolle" media center illustrate, "We chose an illustration with bright colors that would convey joy and warmth, interpreted in a modern style that would attract the attention especially of children, teenagers and young people, and at the same time awaken the youthful spirit in all other church members.

Regarding the central image, we thus thought of bread as a symbol of Jesus' message and, inspired by the Last Supper, but adapting it to the figure of the Salesian Family, we decided to put Don Bosco at the center of the image as the first messenger of this family and as the first leaven. Around him is the rest of the Salesian community. So alongside Don Bosco are portrayed first of all a priest and a religious, and then all those who have a more representative role: the laity, men and women of different races, ages, characteristics, professions and roles around the world. Together they all share the bread (the message of Jesus) and each replicates the sharing, thus becoming new leaven, thus a new messenger of Christ, with the mission to take it to their different worlds, among their peers, in their different jobs and to those who suffer the same afflictions. In this way, the firefighter becomes a leaven in his environment, the African nun brings the message of Jesus to the most abandoned corners of society, the immigrant family, seeking their place in the world, is the leaven for those in the same situation, and so on...

Our poster is meant to indicate that each of us is called to be the leaven of the world in which we live, where through our diversity, simplicity and humility we can take the message of Jesus to every place, expressing his love through our actions and words."

We have 75 guests and no members online