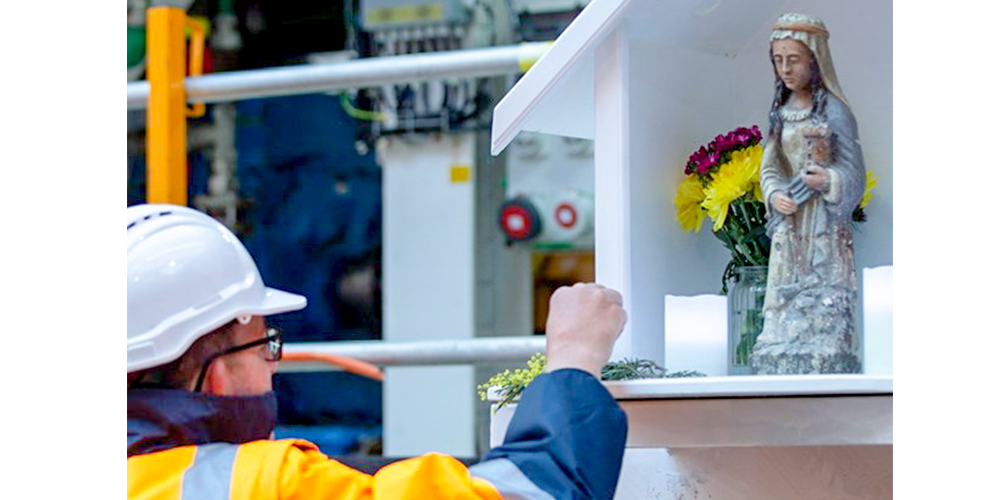 A statue dedicated to St Barbara has been placed at the tunnel entrance in Melbourne’s CBD. Currently undergoing the most significant works in decades, the city is preparing to add two new underground train lines and with digging to commence, the statue was placed to look after those working in the tunnel.

Amongst her patronages, St Barbara cares for tunnellers and so, over the years, a long-standing tradition has emerged that one of the very first tasks to be completed on a tunnelling project is to establish a small shrine to St Barbara at the entrance to the tunnel. Once this has been completed, a dedication and an invocation to St Barbara for the protection of all who work on the project during the construction

Victorian Premier Daniel Andrews announced on his Facebook page that the statue to St Barbara had been set to mark the beginning of the digging process. The particular statue used he said, had “already watched over workers in Shanghai, Hong Kong, France and the Netherlands.” The statue will follow construction sites around the Melbourne CBD, keeping workers safe under her care.

Tradition stipulates that St Barbara lived around 200 years after Jesus and was the daughter of a rich pagan who kept her locked up in a tower in order to preserve her from the outside world. Having secretly become Christian, she rejected an offer of marriage that she received through her father. Her father commanded that a private bathroom be built for her use near her dwelling, and when he left on a journey, Barbara requested that builders put three windows in it, as a symbol of the Holy Trinity, instead of two as originally planned.

Her father was enraged and tried to kill her but suddenly the tower’s wall opened up and she was miraculously transported to a mountain gorge. Her father eventually tracked her down and brought her before the Prefect of the province, who had her tortured, but Barbara refused to give up her Christian faith. During the night, the dark prison she was held in was bathed in light and every morning her wounds were healed. Torches that were to be used to burn her went out as soon as they came near her. As her father became increasingly frustrated, he executed her by beheading. On his way home, he was struck by lightning and his body was consumed by flame!

Nowadays, St Barbara is venerated by Catholics who face the danger of sudden and violent death at work – tunnellers! This also includes miners, tunnellers and she is invoked against thunder and lightning and all accidents arising from explosions of gunpowder!

St. Barbara, pray for us!