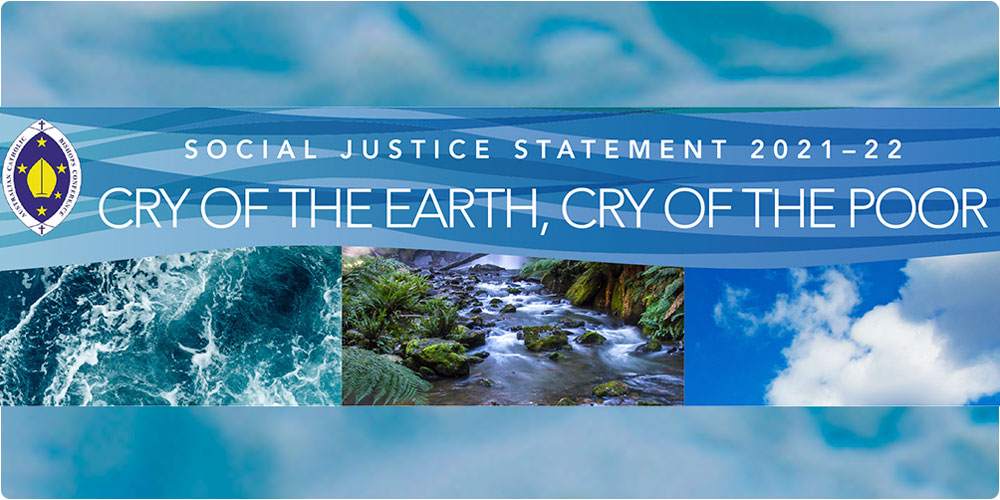 The full Social Justice statement is availble to be read here.

The millennium drought, the 2019-2020 bushfire season, Covid-19, and the 2021 floods have raised questions for many Australians about our common home. In response to these events, Catholic agencies developed better ways of coordinating emergency help. However, planning at the national level for mitigation and adaptation to the changing frequency and intensity of severe weather events and a just transition to a low carbon economy is also needed.

We know that the safety, health, and livelihoods of those who are the poorest and most vulnerable in our communities are usually the most severely impacted. That is why Pope Francis often speaks of responding to the cry of the earth and the cry of the poor. Social, economic, and ecological issues can only be effectively addressed in an integral way.

In this Social Justice Statement, we offer some theological foundations for our response to the cry of the earth and the cry of the poor. They emerge from Scripture, the theological tradition, our Catholic social justice teachings, and the wisdom of the world - including insights of the First Nations peoples - placed in dialogue with experience.

These foundations are: creation in and through the Trinity; sacramentality within all created things; wonder and beauty; and conversion. We hope that these will ground and inspire faithful and effective responses by the whole Catholic community. 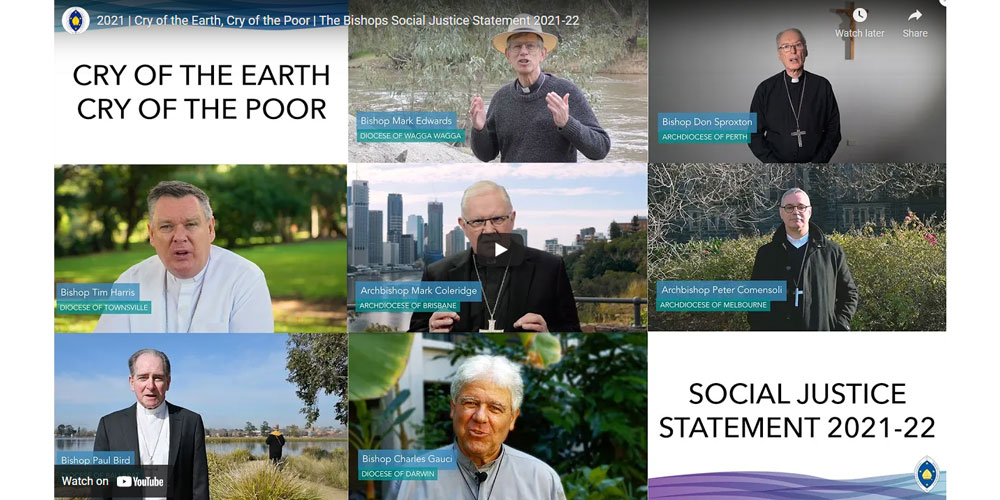 A video Statement featuring some of the Australian Bishops speak to the need for enviromental protection.

Fires, floods, and droughts have become less predictable and more intense. Even experienced people like Neil Ward, a natural resources and conservation manager from Victoria, can find themselves confounded by the increasing ferocity of bushfires:

“Throughout my career in natural resource management, I have attended quite a few large fires, saved houses, and have even been stranded in front of a fire, but never had I felt such confusion as trying to resolve what seemed the sensible thing to do when my gut feeling was to stay and defend.”

Families that have been farming for generations are rethinking their operations while others are leaving the land. For example, New South Wales farmer Lucinda Corrigan says:

“The first thing that we’ve done much more successfully, in the past few years since the Millennium drought, is protect our soil resources by better management of livestock, using the water when it falls more efficiently and preserving it in pasture and in the landscape...”

The mining sector may only employ 2-3% of the Australian workforce, but it is a very important employer in some communities. These communities are anxious about the future, as a Lithgow resident explains:

“…the domino effect that the closure of this mine will have would be disastrous for the local community. Schools will be forced to lay off staff, shops will close, and people will move away... the town [is] hanging by a thread as it is.”

Whether planned and managed by governments or not, a transition away from a carbon-based economy is already underway. A new energy trajectory is being set as we speak. Rather than delaying a commitment to sustainable energy sources, concern for the future of communities that have been reliant on extractive industries should be built into the transition.

Our “interference with the intricate balance of natural ecosystems” is contributing to the outbreak and spread of zoonotic diseases which are caused by pathogens jumping from animals to humans. Nearly 70% of zoonotic infections are linked to human environmental changes. Both Covid-19 and the Hendra virus are zoonotic. Katherine Barraclough and Fiona Armstrong explain that in Queensland the extensive destruction of east coast forests and unsustainable land clearing for new housing estates and other projects:

“… resulted in bats… coming into closer contact with horses. Infected horses appeared to have contracted Hendra virus from bat urine or faeces, and were then able to infect people.”

Inspired by Scripture, Pope Francis sees the pandemic in terms of its potential for positive change. Just as the great deluge was an opportunity for renewed humanity, the Covid-19 crisis can become our Noah moment. We can find our way to the Ark and to a new future if we recognise and foster the ties that bind us and all things together.

The way in which we have built our cities has also resulted in urban heat islands. In places like Western Sydney, it is becoming more difficult for children to play outdoors, or to learn, because it is just too hot. Dr Sebastian Pfautsch says:

“… looking at Bureau of Meteorology data we know that ambient heat during school days in summer is rising. This means, if you have no air conditioning, you see more days of high classroom temperatures too. You learn less in these classrooms.”

“… for this grandmother tree, the combination of ongoing drought and persistent flames ended her reign at the far edge of the yard. The sight of this old tree with her crown removed brought warm, stinging tears to my eyes. It was a deep hurt of losing someone far older and wiser than me. Losing someone who was respected and adored. Someone with knowledge I cannot fathom or comprehend. When I told my mum that evening, she reacted similarly, a personal and family loss. To others she might just be a big tree.”

Along with the cry of the earth and the cry of the poor, we also hear a cry of the young. They see their future being threatened, and want change, as a matter of intergenerational justice. One Year 11 student sums up the feelings of his generation:

“I reckon (the community) should listen to us because at the end of the day it’s our future, right? They’re going to be going and it’s going to be up to us to continue.” 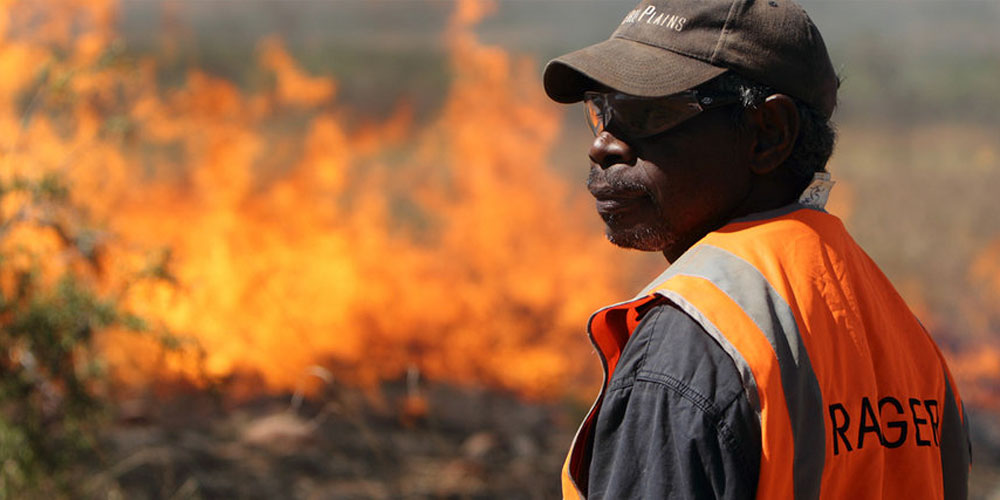 A return to some long-standing traditional forms of land management as performed by Indigenous Australians for thousands of years will greatly help avoid enviromental disaster.

Promoting a relationship of care and kinship with the rest of creation is not a new thing in our social justice tradition. We need only recall St Francis’ Canticle of the Creatures. What Pope Francis calls the “technocratic paradigm” with its ideology of domination of nature is a modern phenomenon.

Pope John XXIII recognised that it had reached potentially catastrophic proportions with the development of nuclear weapons capable of destroying the planet. In the 1970s Pope Paul VI spoke on the fate of the earth at the Stockholm Conference and at the United Nations. During the 1980s Bishops Conferences around the world, especially in Asia and Africa, began to speak out about the environmental impact of dominant models of development.

Throughout the 1990s and into the new millennium, Pope John Paul II spoke increasingly often about our stewardship of creation. He frequently affirmed the harmonious relationships of indigenous peoples with creation on his many travels. Pope Benedict XVI lamented the exploitation and hoarding of non-renewable energy sources by rich nations and stressed the need for international solidarity and coordination.

Now Pope Francis is helping us to understand stewardship in a less human-centred and more mutual way. We are in communion with our fellow creatures who also sustain and care for us. He has shifted the language to care for our common home. Pope Francis is calling us to a relationship based less on duty and more on love.

When we love someone or something, we want what is good for them and act to bring it about. Pope Benedict XVI reminds us that there is also “a good that is linked to living in society: the common good. It is the good of ‘all of us’”.

A commitment to the common good leads us to take action to ensure conditions in which everyone, including future generations, can meet their needs and reach their potential. Every person and every creature is loved by God who made us and wants the good of all of us.

We are being challenged to understand that we do not stand outside of creation but are part of it, “joined in a splendid universal communion” with other creatures. We are in communion with all creation. The “ultimate purpose of other creatures is not to be found in us; rather, all creatures are moving forward with us and through us towards a common point of arrival, which is God …”. 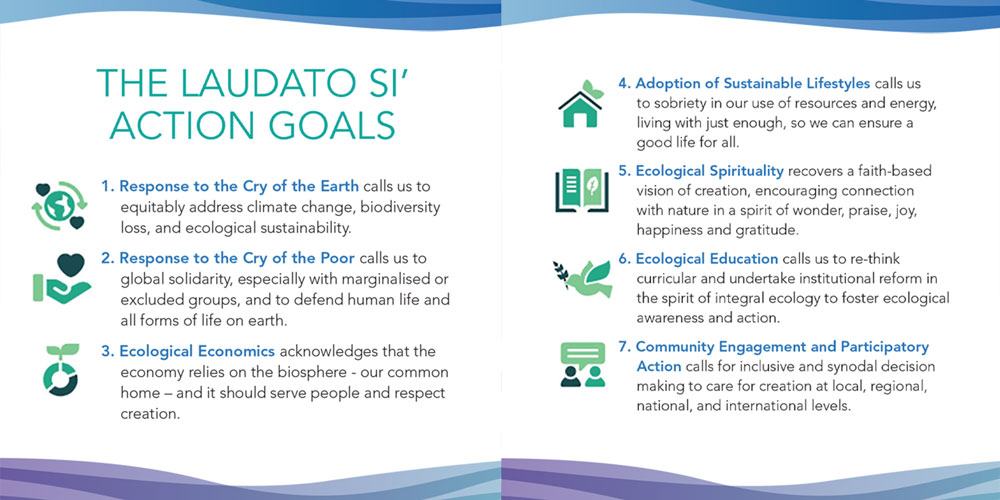 The dynamics of ecological conversion

Pope Francis invites us to conversion saying: “many things have to change course, but it is we human beings above all who need to change.” The state of our common home calls us to a “profound interior conversion… whereby the effects of [our] encounter with Jesus Christ become evident in [our] relationship with the world around [us]”. It is not just a matter of awareness or changing our minds, but a shift at the level of the heart and will that results in changed action.

To achieve reconciliation with creation, “we must examine our lives and acknowledge the ways in which we have harmed God’s creation through our actions and our failure to act. We need to experience a conversion, or change of heart”. Lament, repentance, the effort to repair damage done, and the transformation of behaviour – these are elements of a process of conversion.

Economic conversion and the ‘economy of Francesco’

By calling us to a humbler, more sustainable way of living, our ecological conversion entails an economic conversion. Pope Francis advocates a: “… circular model of production capable of preserving resources for present and future generations, while limiting as much as possible the use of non-renewable resources, moderating their consumption, maximising their efficient use, reusing and recycling them.”