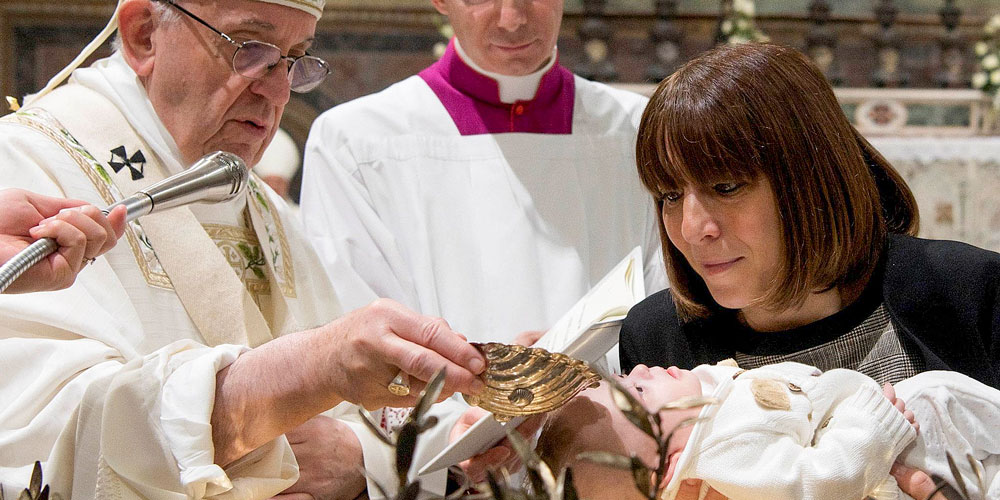 Pope Francis, in his message for World Mission Day, asked the Church to remember her ‘missionary awareness and commitment’, rooted in the grace of baptism

He emphasized “the importance of renewing the Church’s missionary commitment and giving fresh evangelical impulse to her work of preaching and bringing to the world the salvation of Jesus Christ” in his message, released June 9. The 93rd World Mission Day will be held Oct. 20.

"Celebrating this month will help us first to rediscover the missionary dimension of our faith in Jesus Christ, a faith graciously bestowed on us in baptism,” said Pope Francis. “Our filial relationship with God is not something simply private, but always in relation to the Church. Through our communion with God, Father, Son and Holy Spirit, we, together with so many of our other brothers and sisters, are born to new life. This divine life is not a product for sale – we do not practise proselytism – but a treasure to be given, communicated and proclaimed: that is the meaning of mission.”

“The Church is on mission in the world,” Pope Francis stated. The theological virtues of faith, hope, and charity teach us how to be missionaries in the world

“Faith in Jesus Christ enables us to see all things in their proper perspective, as we view the world with God’s own eyes and heart. Hope opens us up to the eternal horizons of the divine life that we share. Charity, of which we have a foretaste in the sacraments and in fraternal love, impels us to go forth to the ends of the earth.”

“The man who preaches God must be a Man of God,” Pope Francis wrote.

“This missionary mandate touches us personally: I am a mission, always; you are a mission, always; every baptized man and woman is a mission. People in love never stand still: they are drawn out of themselves; they are attracted and attract others in turn; they give themselves to others and build relationships that are life-giving. As far as God’s love is concerned, no one is useless or insignificant. Each of us is a mission to the world, for each of us is the fruit of God’s love. Even if parents can betray their love by lies, hatred and infidelity, God never takes back his gift of life. From eternity he has destined each of his children to share in his divine and eternal life.”

He said that baptism “gives us rebirth in God’s own image and likeness, and makes us members of the Body of Christ, which is the Church. In this sense, baptism is truly necessary for salvation for it ensures that we are always and everywhere sons and daughters in the house of the Father, and never orphans, strangers or slaves.”

Baptism “remains the vocation and destiny of every man and woman in search of conversion and salvation. For baptism fulfils the promise of the gift of God that makes everyone a son or daughter in the Son.”

“In baptism,” according to Pope Francis, “we receive the origin of all fatherhood and true motherhood: no one can have God for a Father who does not have the Church for a mother.” Hence, our mission “is rooted in the fatherhood of God and motherhood of the Church.”

“The mandate given by the Risen Jesus at Easter is inherent in Baptism,” he said, and therefore “this mission is part of our identity as Christians.”

In “today’s rampant secularism,” the pope said, “when it becomes an aggressive cultural rejection of God’s active fatherhood in our history, is an obstacle to authentic human fraternity, which finds expression in reciprocal respect for the life of each person. Without the God of Jesus Christ, every difference is reduced to a baneful threat, making impossible any real fraternal acceptance and fruitful unity within the human race.”

Pope Francis notes that Benedict XV, given the universality of salvation, saw “that the Church’s universal mission requires setting aside exclusivist ideas of membership in one’s own country and ethnic group.”

Today, the Church needs men and women “who, by virtue of their baptism, respond generously to the call to leave behind home, family, country, language and local Church, and to be sent forth to the nations, to a world not yet transformed by the sacraments of Jesus Christ and his holy Church.”

Pope Francis noted the coincidence of World Mission Day with the Synod on the Churches in the Amazon, saying, “A renewed Pentecost opens wide the doors of the Church, in order that no culture remain closed in on itself and no people cut off from the universal communion of the faith. No one ought to remain closed in self-absorption, in the self-referentiality of his or her own ethnic and religious affiliation. The Easter event of Jesus breaks through the narrow limits of worlds, religions and cultures, calling them to grow in respect for the dignity of men and women, and towards a deeper conversion to the truth of the Risen Lord who gives authentic life to all.”

We confide our mission to Mary, Mother of the Church, Pope Francis said: “In union with her Son, from the moment of the Incarnation the Blessed Virgin set out on her pilgrim way. She was fully involved in the mission of Jesus, a mission that became her own at the foot of the Cross: the mission of cooperating, as Mother of the Church, in bringing new sons and daughters of God to birth in the Spirit and in faith.”

Pope Francis concluded his message with a brief mention of the Pontifical Mission Societies, who “serve the Church’s universality as a global network of support for the Pope in his missionary commitment by prayer, the soul of mission, and charitable offerings from Christians throughout the world.”