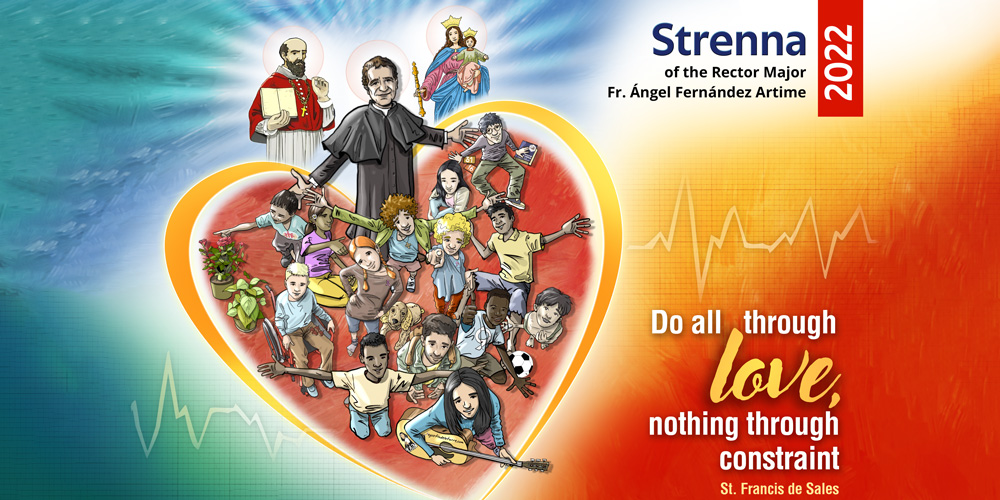 “Do everything through love, nothing through constraint” is the theme that the Rector Major, Fr Ángel Fernández Artime, has chosen for the 2022 Strenna, inspired by St Francis de Sales, in a timely celebration of the 400th anniversary of his death, due to take place in 2022. This motto has also encouraged a number of artists throughout the world who have sent various proposals to Salesian Headquarters, representing this key message for the Salesian Family in images.

The poster is the work of Spanish artist Agustín de la Torre, who places a large red heart at the centre of the image. This acts as a frame for interpreting his work: the heart, after all, is the central organ of life, the thing that brings life to the rest of the body; in the collective imagination it is also the seat of emotions from whence come the hope, joy and love that are to be shared with our neighbour. And in the Salesian heart that always beats for the young – as shown by the patterns of an electrocardiogram sketched against the multicoloured background – we already see at a glance that there is room for everyone: it is a heart where no-one can be said to be excluded.

In a scene of great visual impact, its contours in keeping with Salesian tradition, the author then introduces an element of genuine novelty: a perspective that frames the young people from above, as if God's gaze were upon them; and, on the other hand, this gaze is reciprocated by the young people, whose attitude seems to project dreams and desires towards Heaven. 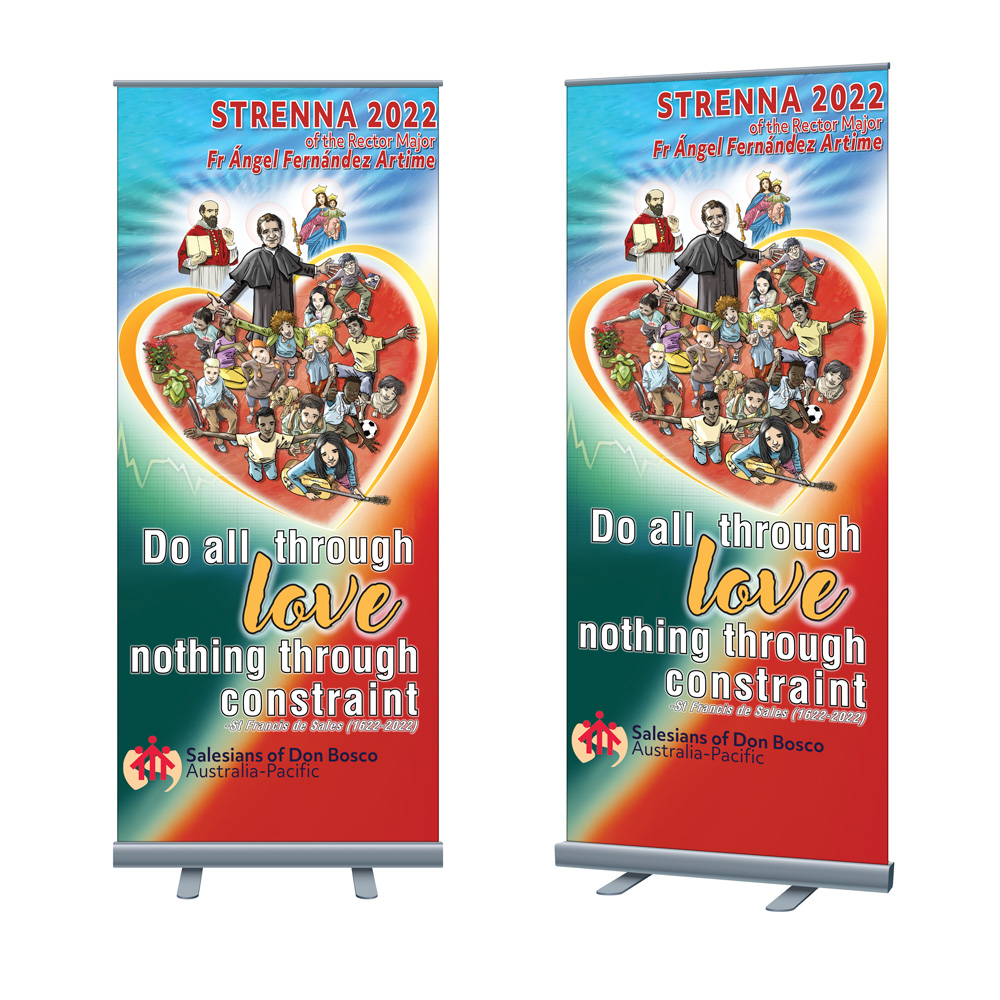 The strenna poster is available for purchase here!

Don Bosco, depicted according to the classical image which by now is a visual legacy for humankind, has been placed at the point of convergence of the two semicircles of the heart, and with his forthright gaze and open arms he seems to indicate to Salesians and the Salesian Family the virtue of acceptance, and the great harvest of young people who await them: boys and girls of every colour, various age groups, in different states of health and social condition, all involved in a multiplicity of activities: some dedicated to music, others who love sport, or look after creation, while others still are nurturing their religious education… Because every young person is important for Don Bosco and his followers, and they are invited to put their heart into every kind of activity.

Then, behind Don Bosco are the two Patrons of the Salesian Society, Saint Francis de Sales and Mary Help of Christians, recalling the origins and even more so the roots of the Congregation and the Salesian Family.

The more attentive observer will have no difficulty identifying the many other references added appropriately to this visual scene. They make the Salesian ‘flavour’ of the poster really exciting: from the roses and their thorns from the famous dream of Don Bosco, up left, to the chestnuts in the lap of the boy seated in a wheelchair, harking back to one of the Saint of youth’s more famous miracles; from “grigio” the dog at the heart’s centre, to logos of Salesians and Daughters of Mary Help of Christians on some of the jerseys worn by the youngsters; from the typical Salesian cross to the book which is the Salesian Cooperators’ Project of Apostolic Life. A boy up right has placed his hand on it… an entire ensemble of elements that could well become the subject of a special competition.

This whole effort of Spanish artist Agustín de la Torre, then, seems to proclaim through image a reminder to all members of the Salesian Family to put their heart into every kind of service given to the young.

Earlier this year, Don Fr Ángel Fernández Artime (Rector-Major) gave some of his thoughts behind the Salesian Strenna for 2022

With thanks to ANS for the original story