Much greater than the hills of Monferrato!

All of Don Bosco’s pedagogy is encapsulated in his autumn outings: familiarity and camaraderie; joy and celebration; a time to walk, as one walks along the paths of life; space for conversation and friendship; and Don Bosco’s good and kind presence.

It was the afternoon of August 15th 2015 and we were celebrating the 200th anniversary of Don Bosco’s birth with 5,200 young people from all over the world in the International Youth Encounter.

Initially, with an idealism far removed from reality, we on the planning team thought it would be possible to walk 35 kilometres with those 5,200 young people, from Turin to the hills of Becchi, where John Bosco grew up.

We soon realized that we had to give up our plan. It would be very difficult to keep up a good pace with so many young people; so instead we started the walk in Castelnuovo Don Bosco, the town where he was baptized and celebrated one of his first Masses – and still very much in line with the theme of his autumn outings!

We walked those eight kilometres with that great column of young people under a torrential downpour the whole way. The rain had been predicted but it mattered not to us and much less to those young people! I could not stop imagining Don Bosco surrounded by his boys, carrying baskets of bread for their lunch or snack, and musical instruments to cheer them up wherever they went. 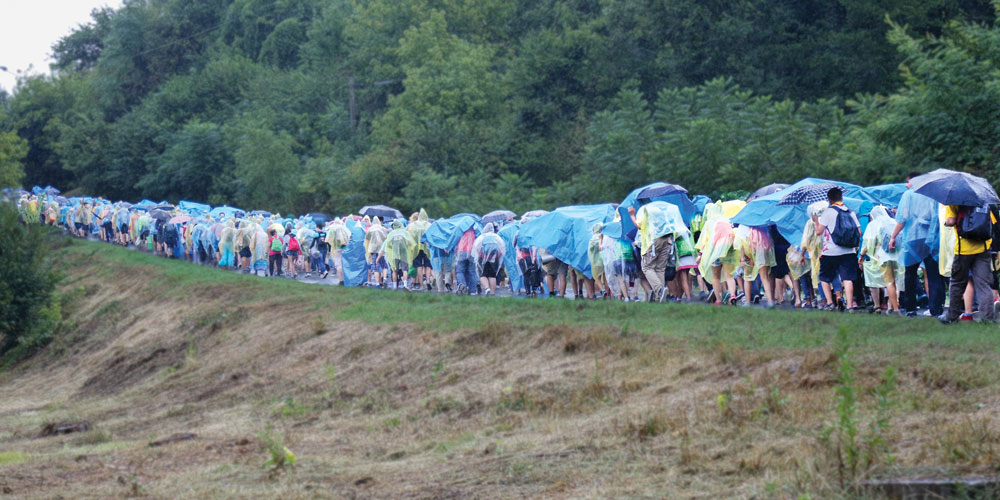 Despite the poor weather, the 2015 march attracted great numbers!

Do you know that behind it all is a precious vision—one both educational and spiritual? José Miguel Núñez has an extraordinary talent for writing and puts it like this:

“For many years, Don Bosco used to celebrate the Feast of Our Lady of the Rosary at Becchi. In the beginning there were only a few who would be included on this special vacation, but soon they numbered more than 100. Don Bosco’s first destination was his beloved family home, and his brother Joseph gladly welcomed the horde of boys and accommodated them as best he could in barns and stables, taking care to provide what was necessary. Certainly, there would be inconveniences, but good Joseph knew how to look the other way and make things run as smoothly as possible.

“After 1858, Don Bosco established true ‘marches’ through the villages of Piedmont and the neighbouring provinces. He himself planned the itineraries and entrusted his boys to friends and benefactors who welcomed them into their homes or prepared some snacks for that “battle-ready army”—whenever it came to quelling hunger. Fruit, freshly baked bread, or a piece of cheese was generously offered by the locals, who were enthusiastic about the hustle and bustle that this priest brought for he had the reputation of being a saint. Though he tried to downplay this fervour, often it was without much success.”

Beautiful testimonies of those joyful days of celebration and unforgettable experiences have been passed down to us. One of these boys, Anfossi, wrote this:

“I always remember those trips, they filled me with joy and wonder. I accompanied Don Bosco through the hills of Monferrato from 1854 to 1860. We were about a hundred young people and we saw how the fame of sanctity already surrounded Don Bosco. His arrival in the villages was a triumph. The parish priests of the surrounding area and usually the civil authorities also came out to meet him. The people looked out of the windows or went out into the streets and the farmers left their tasks to see the Saint…”

All of Don Bosco’s pedagogy is encapsulated in these autumn outings: familiarity and camaraderie; joy and celebration; a time to walk as one walks along the paths of life; space for conversation and friendship; and Don Bosco’s good and kind presence. Like that of an adult accompanying another along his/her journey, he has a good and kind word for everyone and extends a gesture of closeness and solidarity with those who show greater difficulty in reaching the goal.

The music and the celebration flooded their hearts and reawakened enthusiasm in those young people. They were happy to be close to this father whom they admired so much and to whom they were so grateful. In perfect marching formation and playing their musical instruments, the advent of Don Bosco’s boys in those small villages of Piedmont must have been quite an event. 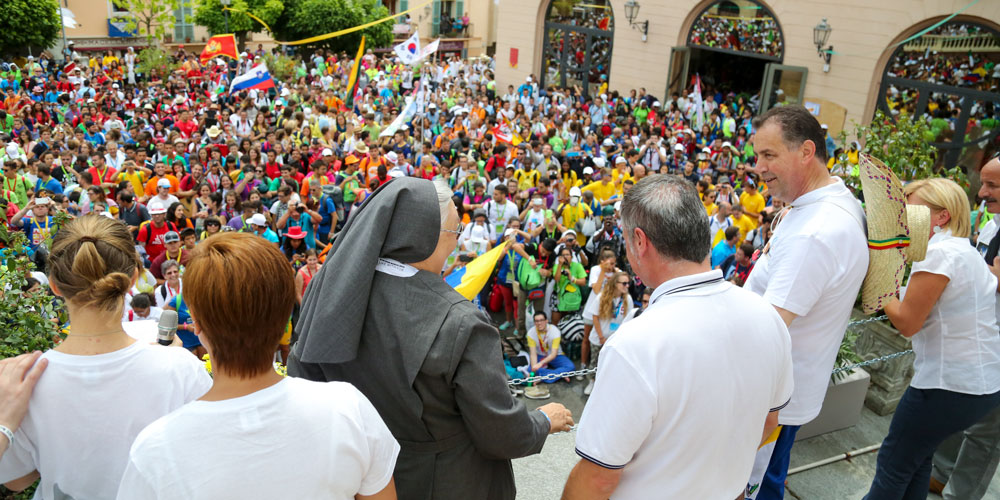 The Rector Major of the Salesians and the Mother General of the FMAs address those gathered to celebrate the momentus occasion!

The boys were filled with wonder and joy but for Don Bosco it felt as if he were already in heaven as he rejoiced at the smiles of his young people and their festive songs. Prayer and benediction with the Blessed Sacrament in the village church were a constant. Without knowing it, many of those young people would continue to travel with him throughout their lives even after their paths diverged; Don Bosco mark stayed with them well beyond the hills of Monferrato.

I am thinking now about how important it is for us to invite our adolescents and young adults, our “digital natives” who live immersed in the digital world, to experience the richness of personal encounters (and not through a telephone screen): the precious exercise of listening to each other; of laughing together; of being silent during a simple prayer; of marvelling at a sunset; of experiencing the joy of greeting the elderly who are resting for a while on their porch, watching people pass by—they who have already lived life abundantly, thanks be to God.

I leave you these words which the Pope addressed to us Salesians at our General Chapter: “I like to think that we are still very capable of dreaming and of helping others dream.”

We have 111 guests and no members online