The Don Bosco Feast Day Festival is quickly becoming one of the best days on Melbourne’s Salesian Calendar! Taking place on Sunday the 9th of February (just over a week over Don Bosco’s actual feast day, the 31st) it was a day full of all things great about being Salesian; fun, food, friends and family!

The day kicked off at St John the Baptist Church in Clifton Hill, for it’s regular 10:30am mass, albeit with a twist. The regular parishioners were treated with lots of new faces as the Salesian Family gathered en masse. There were young people who had just been on camps over the summer in Safety Beach, members of the Vietnamese Salesian youth group from Brunswick, staff from schools, co-operators, friends and family – any one with an affiliation was welcome! 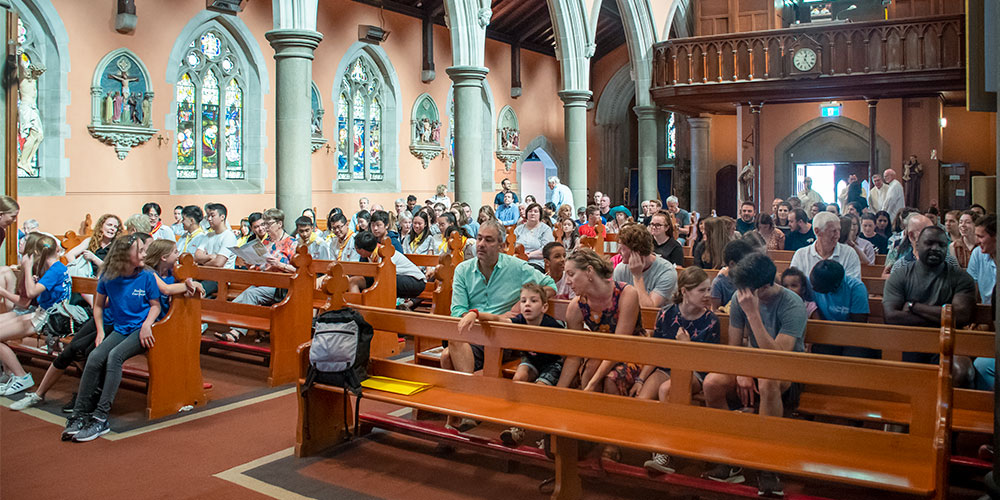 The mass was a wonderful cross-section and gathereing of the Salesian Family!

The biggest treat was the contingent of boys who had travelled all the way from St Joseph’s college in Fern Tree Gully. They led mass with an ensemble of instruments and a choir, that also welcomed in any other musically inclined people in the congregation. 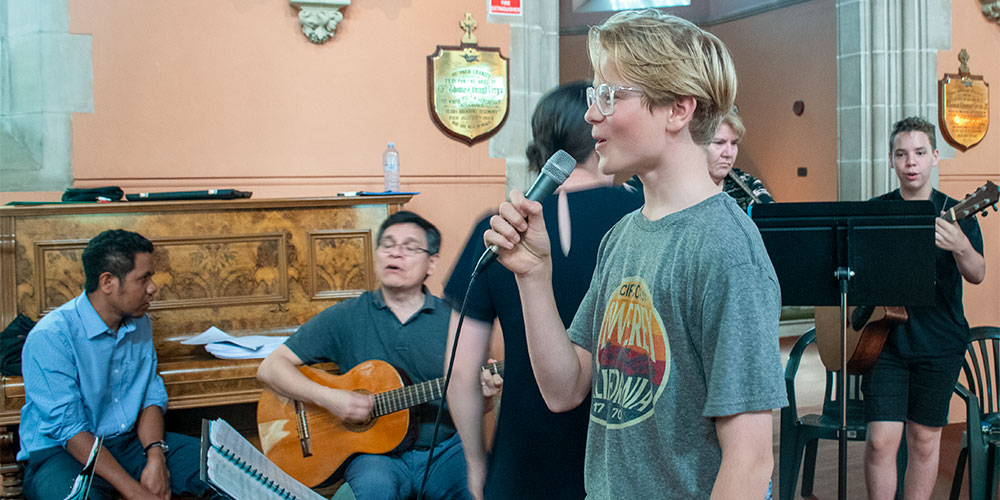 Jett's solo was during mass was a beautiful thing to witness 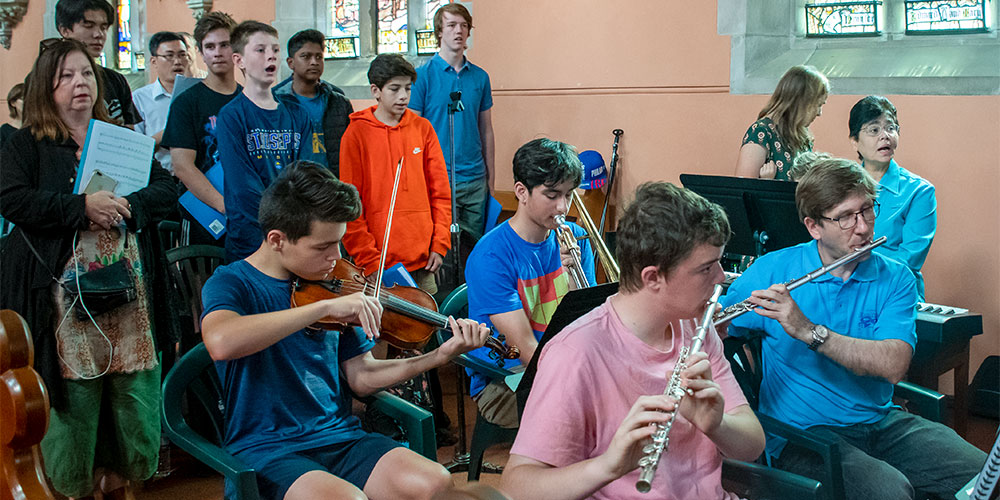 The band and choir elevated the mass out of your typical run-of-the-mill Sunday fare!

Mass was celebrated by Provincial Will Matthews and concelebrated by Bernie Graham, Peter Carroll and Martin Tanti and readings were done by various members of the Salesian family. Young people, camp staff, past pupils; all were represented throughout the entire service in what was a beautifully fitting tribute to Don Bosco.

The celebrations then rolled on next door into the primary school, where the party begun in earnest. Some of the youngest people made a beeline for the jumping castle, others the face paint. Some of the growing teenagers went straight to the (free!) food trucks (kebabs or burgers!) whilst others gathered around the stage and listened to the live music on offer; the stage had been set for musicians to share their talents providing entertainment for all. The adults however, were mostly content to just catchup, share a smile and make their way to the various attractions in their own time!

The small planning team had done an exceptional job of ensuring that everything was ready to go as soon as mass ended, and it showed. The was a joyful, exuberant atmosphere, yet it was also relaxed as everyone felt comfortable to simply be with one another and enjoy each other’s company. People were able to come and go all day, dropping in just to say high and touch base with old friends. 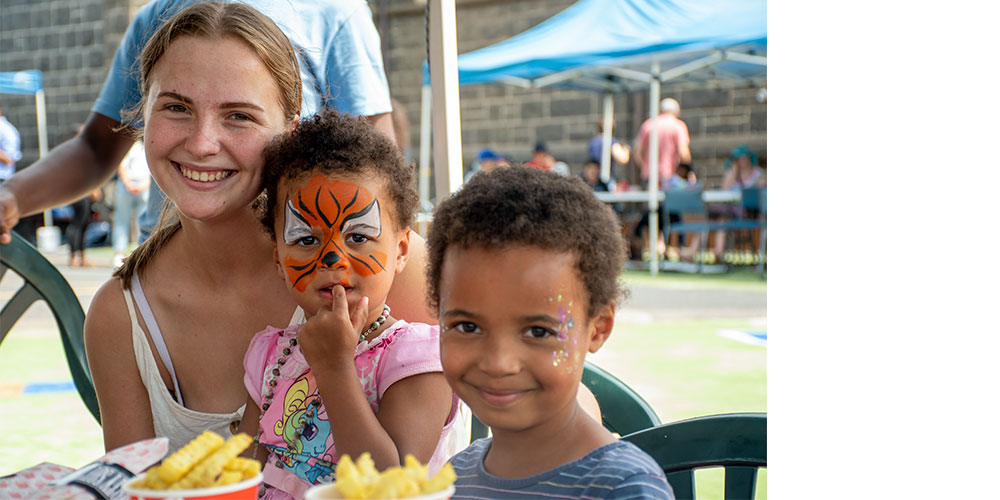 The day was full of food and cheer, as everyone enjoyed one another's company!

Having recently signed up to the Don Bosco Green Alliance, the planning team had also put a concentrated effort into ensuring that the event reduced its waste as much as possible. Bins were set up for recycling, soft plastics and food waste, and everyone were asked to ensure that they disposed of anything they no longer needed appropriately.

As it became clear that most people had finished eating, in true Salesian style, it was time for some games to be played! As the MC's encouraged as many people as possible to join in the fun it quickly became clear their calls were heeded - all ages were represented amongst the participants in the games, some of the youngest and some of the eldest mingled alike. 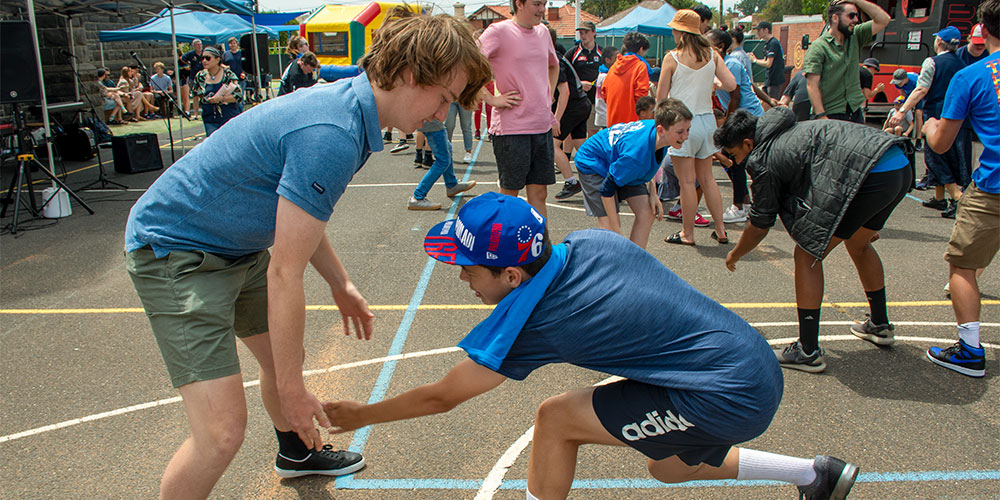 Two players engage in "knee slaps" were the idea is to slap the other person's knee first!

Following this, Sr Rochelle Lamb quite literally stole the show, as she put on a dance masterclass! Line dancing took place as the crowd followed her lead, bringing smiles to plenty of faces. Meanwhile, throughout the day a dodgeball competition had been organized, with teams competing against one another in a friendly yet earnestly fierce competition!

Prior to the event, the planning team had discussed the possibility of using what is a fully-free event for attendees as a means of raising some money for Nagle College. The college is a part of the Salesian family and some of the members of that school community were affected by the bushfires, losing their homes.

A raffle was held, offering three experience-based prizes – passes to the Moonlight Sanctuary, the Melbourne Star and to Adventure Park in Geelong. People were also able to donate through direct deposit to the fund and part of the collection from mass was also contributed. All up, approximately $500 was raised for the families, a great effort by all on the day. 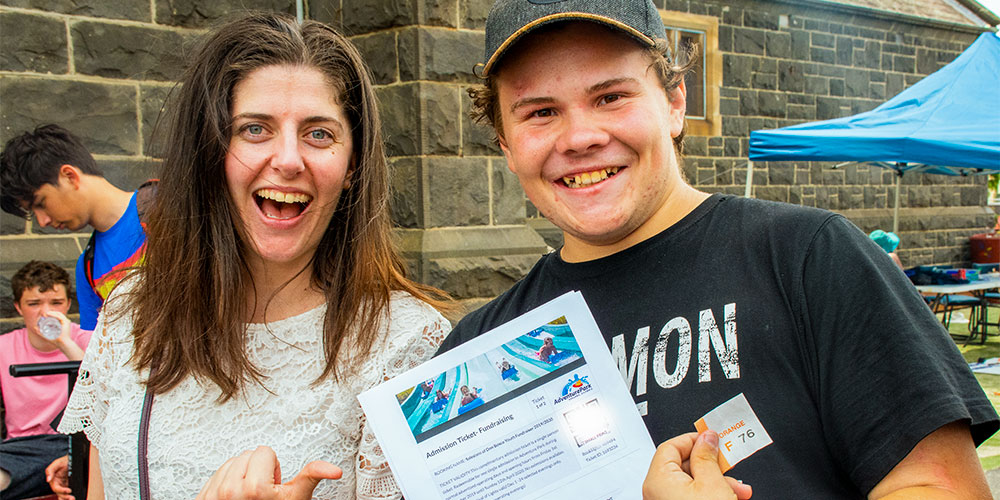 Daniel shows off his prize and winning ticket!

Thank-you to all involved in the pre-planning, setting up, running and packing up of the day. You’re stellar efforts allowed everyone to have an amazing day, celebrating the gift that we all share; the gift of Don Bosco!


If you would like to support the Salesian communities at Nagle college in their rebuild, please contact Romina on (03) 9377 6000