We are accustomed to reading of Don Bosco in an urban situation. Cobblestoned streets, dark laneways, drab monotonous buildings, the grime and dirt, the hustle and bustle of city life! But Don Bosco was a lover of the great outdoors.

We can imagine the young Don Bosco rising from his straw mattress in the morning. He stretches his arms, knuckles the sleep out of his eyes, pulls on his rough corduroy trousers and woollen shirt and slips down to the kitchen. A breakfast of polenta, bread, and sparkling fresh water await him. Then he gets his ‘orders’ for the day and walks out into the sunshine.

It never ceased to amaze him- the panorama that he saw from the hill of the Becchi. Eastwards lay Murialdo and further on the village of Castelnuovo: westward lay Caprilio, northwards were the upper reaches of the Asti valley, and he knew that over that horizon was the big City.

The rolling hills of Castelnuovo are more than enough to inspire anyone!

He never had any hankering to visit Turin. He was a farmer’s son, a child of the countryside. The things that he desired were to be found among the trees, the meadows, the farms, the vineyards, the orchards and the dusty roads that crisscrossed the valley. He loved it all even when it changed its seasonal overcoat.

Every cow he took out to graze in the fields, every furrow of land he dug, every grape he gathered from the vine, every animal he fed hay to- all was a part of his way of life, a part of him. It surrounded him and it gave him that touch of nature which the great outdoors implants in those who love it.

As a child John Bosco was a fearless little watchdog of the vineyard, staying awake at night to guard the family’s precious vines. On one occasion he foiled a stranger who tried to pilfer a turkey. He learned a lot from the blackboard of the countryside, and it was from this same blackboard that he was able to write an authentic biography of Saint Isidore the farmer, a treatise on ecology and a “Code of Conduct” for farmers, which includes this powerful statement.

“My dear friends, I wish to help you to appreciate your state of life as one that is of utmost importance: I want you to understand that your way of life is most honourable, blessed by God and a sure way to Paradise. You are servants and workers who reveal the power of God as Creator. Once you lay down your tools all life in the countryside stops. Your career is all the more dignified and respected because in the beginning God created our first parents as cultivators of the fields and gardens.”

We are constantly being reminded nowadays that walking, jogging and marathoning are super means for keeping fit and healthy. Don Bosco knew all this. He went to his native place, Becchi, when he fell ill and took several of his schoolboys with him so they could exercise and fill their lungs with the fresh air of the countryside. The old farmstead, silent and sombre after the split up of the family, became once more the scene of a cheerful atmosphere that was to be repeated year after year.

It was on these hikes with his schoolboys that he revealed how he “flung his soul into the air like a falcon flying.” Generally they walked the distance from Turin to Murialdo, about 20 kilometres of some of the most beautiful scenery in Piedmont. 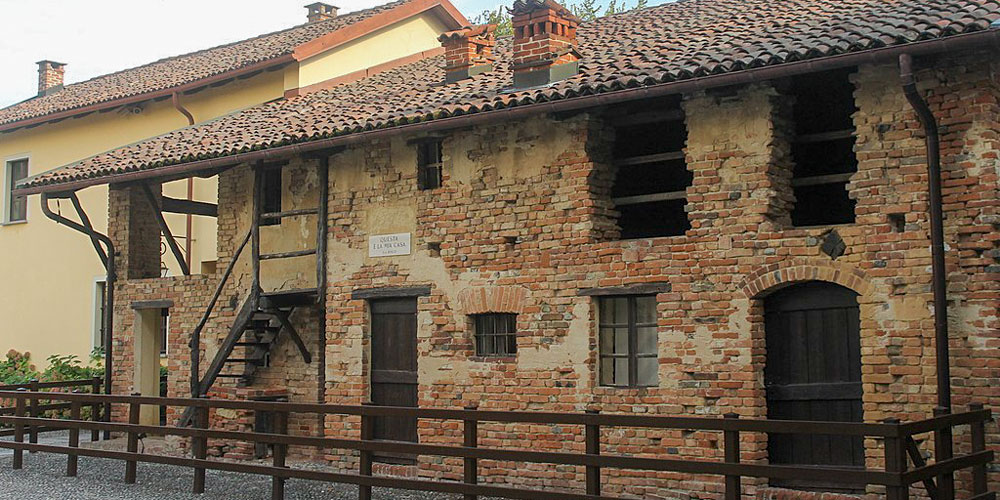 Don Bosco's child home has now been converted into a museum that offeronline guided tours!.

The first lap of the journey was Turin to Chieri where kind friends handed out refreshments. On leaving the ancient medieval town the hikers continued their merry way eastwards towards Riva, Buttigliera, and finally Murialdo and then The Becchi. The old farm house where Don Bosco had grown up and spent his childhood never ceased to amaze the lads - it was so poor, so dilapidated, so ready to fall apart.

Don Bosco’s brother Joseph had built his family home nearby and supplied the boys with fresh straw for bedding. It was not an ideal situation but the lads loved to “rough it” and their extra help in the fields and about the gardens brought grins of joy to Joseph and his family. The boys nicknamed the old house “Don Bosco’s palace”!

In those traditional outings, Don Bosco was a happy man. It could not be otherwise, for the countryside was in his blood. The boys eagerly crowded around him on the walks through the fields and lanes, as he expertly told them about farming, vine-growing, the various sorts of trees, the best places for bird nesting, and the names of this and that wild flower and shrub.

The fact that many of his dreams included so many varieties of animals, wild and domestic fruits, flowers and rural scenes; the fact, too, that he strongly suggested that his followers go and find ecclesiastical vocations among the farming community - all point to this, that you can take the man out of the country but you cannot take the country out of the man.

"Among the clove-scented grass,
Among the new-mown hay
Among the hushing of the corn
Where the drowsy poppies nod,
Where ill thoughts die and good are born-
Out in the fields with God!"