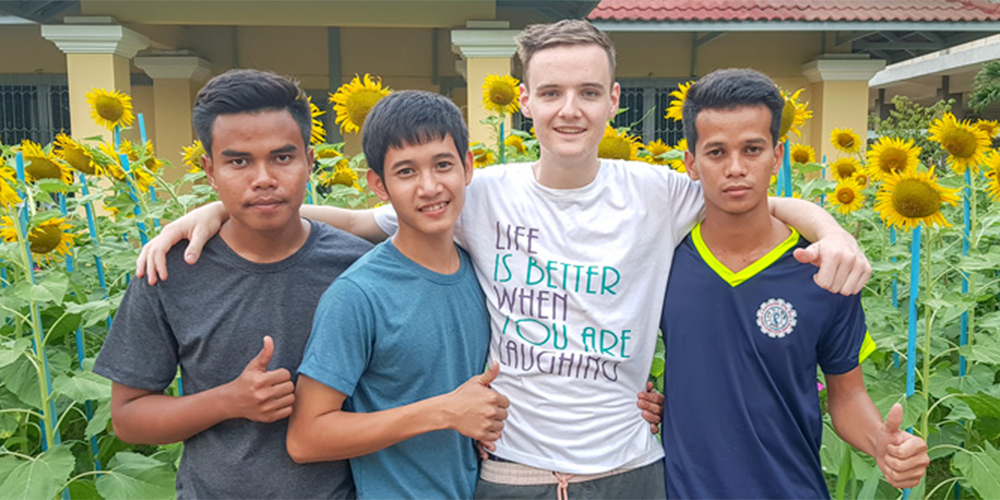 Kakada was an exceptionally quiet boy; shy and very hesitant to do anything that would make him stand out. Of course, this is only natural for any boy of his age at a new school and seeing a foreigner for the first time! Yet, all it took for him to come out of his shell was just a moment of interaction, a mere second or two of interest.

“It was during study hall,” reflects John Gartland. “I saw he was struggling over some English work and sat next to him and asked if he needed help.” The result from this moment has shocked John; now, Kakada asks questions, engages in conversation and seeks out company for leisure times. “Of course,” John laughs with a self-deprecating twinkle, “it could just be that I’m the first foreigner he’s ever seen, and to be fair I am unnaturally tall so maybe it’s like being at the zoo for him!”

John is a long-term volunteer with the Cagliero project, primarily working as an assistant to the border boys as well as an English and Music teacher at the Don Bosco Tech School in Phnom Penh, Cambodia. Originally from Melbourne, Australia, John’s daily life now revolves around the comings and goings of the school, where his main role at the school is as an assistant to the border boys, caring for between 80-120 people, depending on the time of year.

A typical day involves waking the boys up at 5 a.m. to prepare for the morning study period. As the students go off to their morning classes, John takes the role of English teacher to the young Salesians in training at the school. Come 11.30 a.m. John rejoins the boys for the fun and games of their lunch break, and it is only once the bell rings and they resume their classes that he finally has a moment or two of brief solitude, to breathe, to reset the mind and to refill what is usually by now, a rather empty stomach! Having fun is a universal language, and the local dialect involves a lot of soccer, uno, table tennis and laughter. At first, it was just a couple of the border boys who would engage during the lunch break, but those who affectionately referred to John as “tev” (prounced tey-o), meaning “funny man”, quickly brought more and more into the fold.

To resist the urge of dozing off to sleep whilst supervising during these study times, John makes a point of walking around the room, helping students wherever they need it. “It’s so inspiring to be able to walk around the room and actually see them progressing in their study… especially when I realize there’s no way I would have survived this schedule at my school!” In Cambodia, social structures are very heavily informed by family values and can appear to be quite hierarchical. The role of the parent is sacrosanct, and respect filters down from there, with older siblings having an air of respect, earned through their increased responsibilities. Education is so highly valued that teachers can come to be a part of a family, earning their place through the great gift they provide. It was momentous then, when the boys started to say “goodnight, bongpro” to John as they went off to sleep; “goodnight, older brother”.

In the end, it is these culture differences that pip the busy workload as the biggest challenges facing Cagliero volunteers; the need to completely re-learn what is considered socially acceptable throughout a myriad of complex situations. Games where people take on the roles or mannerisms of any animals are simply unplayable; the level of insult is just too high. Tragically, Cambodia is still very much haunted by the spectre of the Khmer rouge, both on a national level in terms of economic and industrial growth but also on a very personal level. Talking politics is quite simply a “no-go zone” and committing anything political into writing on social media can have very heavy consequences. On top of this, John has gradually become acutely aware that whenever one of his students seems sad, or has something on his or her mind, it may well be that even after all these years, the deep pain of losing a mum, a dad, a sister or a brother has not yet fully healed.

Even in the classroom, there are profound differences that must be understood and yet, aren’t always. There is one story in particular that some of the students shared with John, that still shocks him whenever he thinks about it. A volunteer (who had been sourced from a different pathway to John) lost her cool in the classroom and raised her voice to the students. John, however, something of a class clown during his own school years, wasn’t perturbed by the teacher; it was the reactions of students that shocked him. Tears could be seen welling up in eyes, a real palpable sense of pain etched on their faces even as they retold the story. For many of the students, aged into their late teens and early twenties, this was literally the first time they had ever been yelled out, and simply did not know how to react nor cope with it; a complete rupture of social norms.

When a volunteer has undergone less than adequate formation, it shows through and brings a lot of pain to all involved. Frustration abounds if a volunteer is rigid and refuses to adapt to their new environment or was not properly informed of what to expect and what is expected of them.

“I can’t stress the importance of that formation with Lauren (Hichaaba, Director of the Cagliero project) and Romina (Martiniello, Assistant Director of the Cagliero project). They really make us understand that we are going to a new place and because we’re only there for a short time, we’re not there to turn the country around or flip its culture,” muses John, “even if we don’t agree or find it hard ourselves to adapt.”

Of course, a journey such as this doesn’t come without significant changes to the individual. Some of them seem fairly mundane. Having only ever worked part time and lived with his parents, John has found that he is capable of work in a full-time capacity and is quite capable of dressing himself. In fact, during a recent visit from his parents and sister, it was with a sense of surrealism that he realized that he was the responsible adult of the group; responsible for their safety, ensuring they had enough to eat, making sure they knew how to behave, double checking they wore culturally appropriate clothing – the whole lot!

Having crossed the half way mark John’s stay in Cambodia, questions started to arise that led to even more “out of character” behaviour. What he should do next year in terms of study or work were clouding his brain, and the anxiety associated with unknowing was a constant presence. One night, after the customary night prayer, he returned to the chapel, in complete silence. Only the faintest flickers of light amongst the inky blackness of the room around him could be seen, and it was here that John found a new sense of awareness, an appreciation of his place in a big wide world.

“I finally felt pretty good about just going with the flow (of the school) as I really took time to think about all the boys I was looking after and how they must have been feeling over the last 18 years, and realized that ‘everything will be alright’ in a sense, which brought peace”. There are Buddhist teachers who are firm followers of their faith, yet also say that they are ‘followers of Don Bosco!’ There is, of course, a simple wisdom in this: Don Bosco’s method of loving kindness and presence will not just follow John in whatever paths he treads, it will be explicitly a part of the mark left by John in every step that he takes for the rest of his days.